My buddy Troy and I were part of a group of Entrepreneurs’ Organizations May 2008 visit to the Pentagon to meet with a number of military brass though a program called the Army’s “Fly-In Visit.” In addition the the “Fly-In”we also got to a Twilight Tattoo, an hour-long military pageant.

Below Troy and are speaking with Lieutenant General David Huntoon, Director of the Army Staff. LTG Huntoon made an effort to personally meet and greet all of his guests. In the picture below LTG Huntoon just asked Troy about his military service. Troy has never served in the military, but we got a great kick out of the question because I call him “Human Weapon” because he is a 3rd degree black belt in Taekwondo and I regularly tease him that he is my bodyguard.Troy is such a character that he embellished the photo below to play out the subliminal exchange that we were having while conversing with LTG Huntoon. 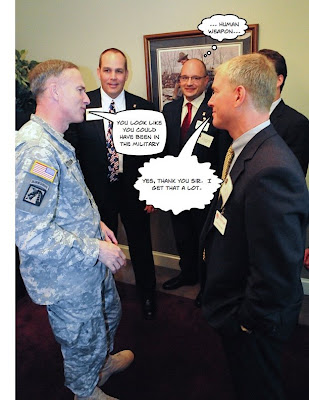 12 Apps to Scale Up Your Business in the New Year

Thinking big, acting bold, establishing key networks and dynamic relationships and evaluating your financing options for the purpose of expanding are a few of the…

Special thanks to Atka, the magnificent ambassador wolf, and the staff from The Wolf Conseravation Center for introducing me to “The Wolf Creed.” I found the…

Transparency in a Cyber World

In the past few weeks, we have seen the dangerous side of how hackers can unlock corporate secrets with a few keystrokes, creating radical transparency…

Why CEOs Need a Triangle of Trusted Advisors

Once, when I was running Wave Dispersions Systems, a maritime fence designed to stop a Water Borne Improvised Explosive Device (WBIED), a bankrupt client refused…

How to Spot a Hustle

I had a great breakfast at The Front Porch Cafe (@frontporchmiami) this morning. The service was very good, not sure the waiter’s name, but he had…

© Created with by 8Theme. All Rights Reserved

Use this form to find things you need on this site

You can add any HTML here (admin -> Theme Options -> Promo Popup).
We suggest you create a static block and put it here using shortcode

No products in the cart.

Sorry, we aren't online at the moment. Leave a message.

We'll get back to you as soon as possible.
Login now

Help us help you better! Feel free to leave us any additional feedback.

How do you rate our support?
close